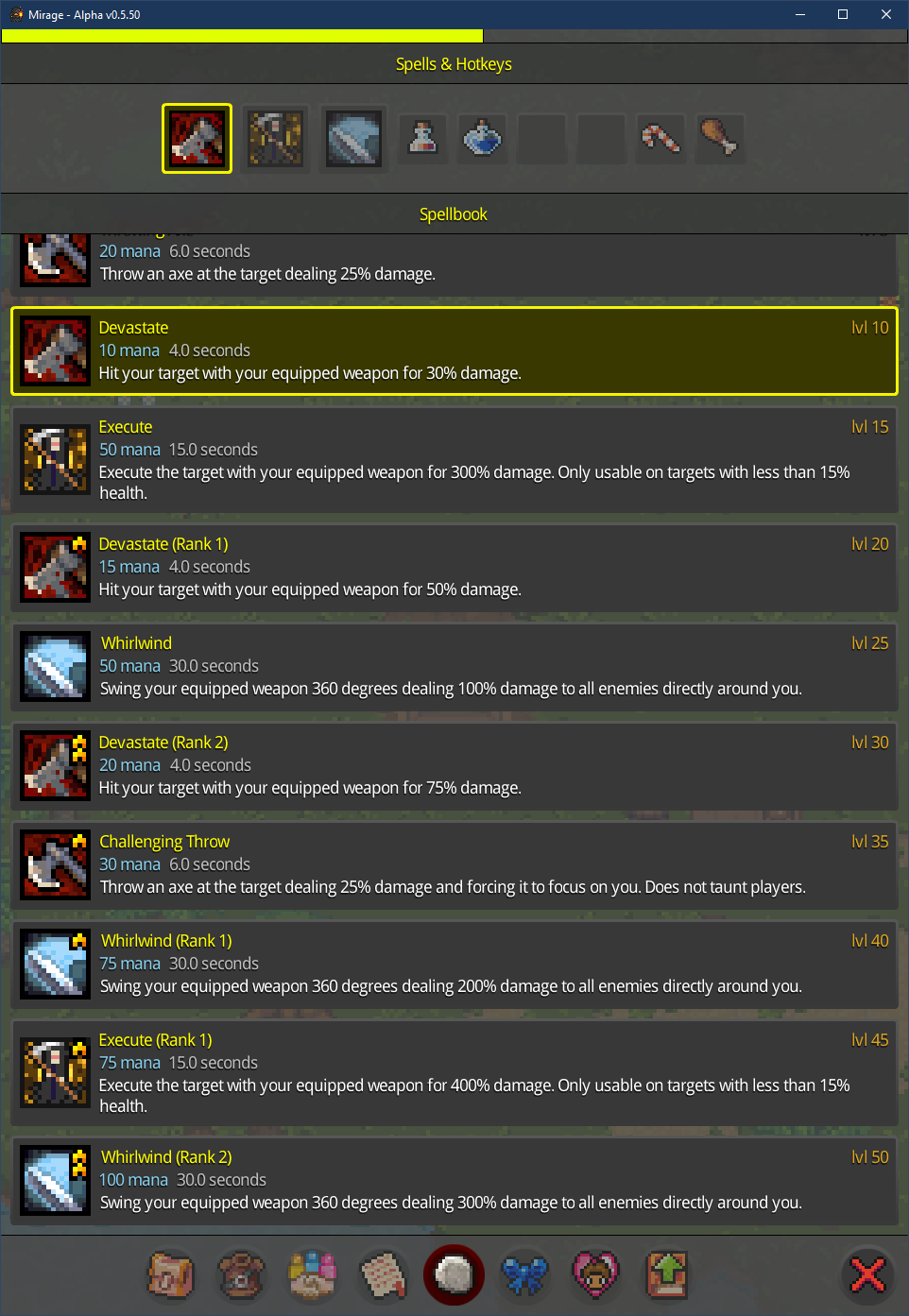 Hey everyone, This release stretches out the active spell progression a bit as you level and also tackles some things I have found annoying while playtesting myself. Making runes now rewards magic experience Regeneration is disabled when stacked on other players Challenging throw no longer taunts mobs until rank 1 Certain spells have had their damage, mana usage and cooldowns halved so you will be pressing buttons moar Certain spells have been split out into ranks to lessen the uber power of lower level players and provide some additional progression The d-pad no longer loses focus on mobile when you[…] 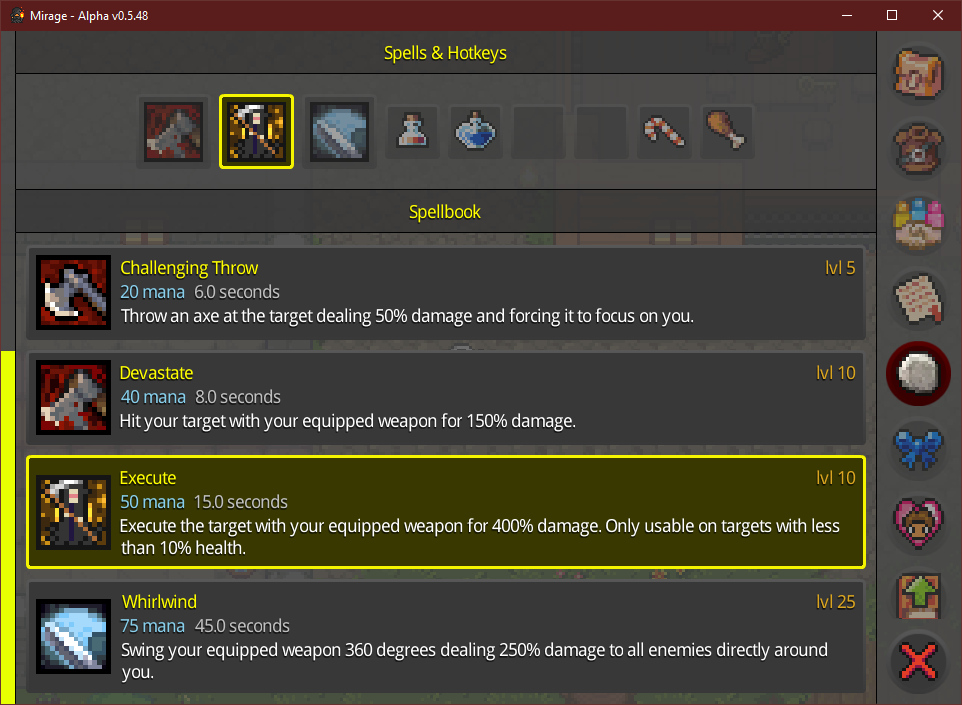 Hello everyone, this is the stuff I couldn’t get done in time for yesterday’s release. I was eager to get it out before the weekend so here we go 🙂 First here are the spell changes: Knight Spells Challenging Throw Damage reduced to 50% Devastate 40 mana 8 second cooldown Hits the target for 150% damage Execute 50 mana 15 second cooldown Hits the target for 400% damage Only usable on targets with less than 15% health Whirlwind Will no longer hit players if you are not in pvp combat Mana increased to 75 Cooldown reduced to 45 seconds Damage[…] 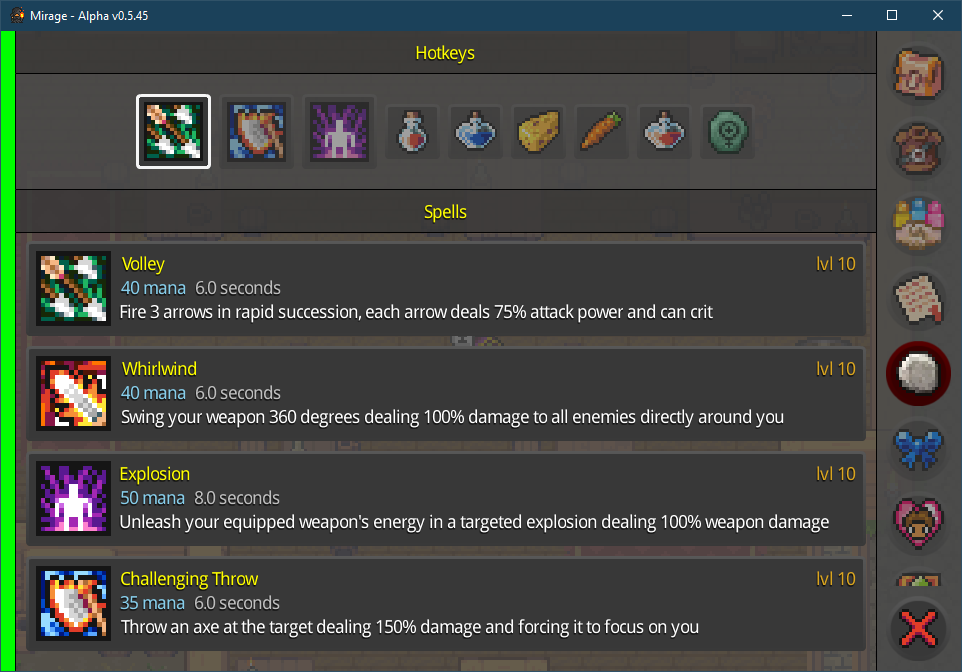 Hello everyone, This is a pre-release of the new spell system to test all of the changes are working as intended. This release sets the foundation for players being responsible for crafting their own resources, as well as establishes the 3 spell rule. Title screen revised, now with more animation Hotkeys HUD rewritten, there are now 3 spell slots Desktop client has 2 extra item hotkeys Hotkeys character screen rewritten, now includes: Spell hotkeys & spellbook Hotkeys HUD shown unique for each platform Spells can be changed when safe (or in town) and not in combat Spell level requirements and[…] 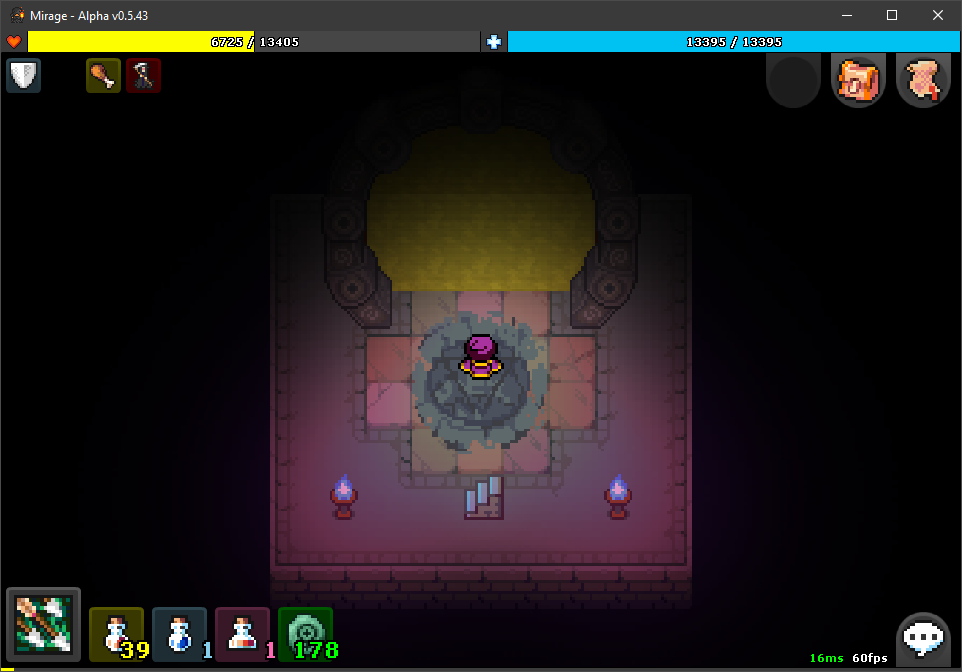 A new Chaos gate has opened An extra phase has been added to Chaos gates Signs now inform you which phase you are in Bosses are guaranteed to drop an appropriate amount of currency Drop rates reduced in Chaos zones Hotfix 0.5.44 released 120 chaos gate rebalanced Fix for new gate not glowing Fix for client side crash Mage elemental resistances set to flat 15% Excluding physical, holy and poison

This is a patch release for version 0.5.41 🙂 Fix for bosses respawning instantly Chaos monsters loot pools have been upgraded (fixed) to drop unique items Level 110 chaos monsters have been eating badly during lockdown and are a bit weaker Chaos monster respawn rates increased slightly Chaos realms now have 3 phases 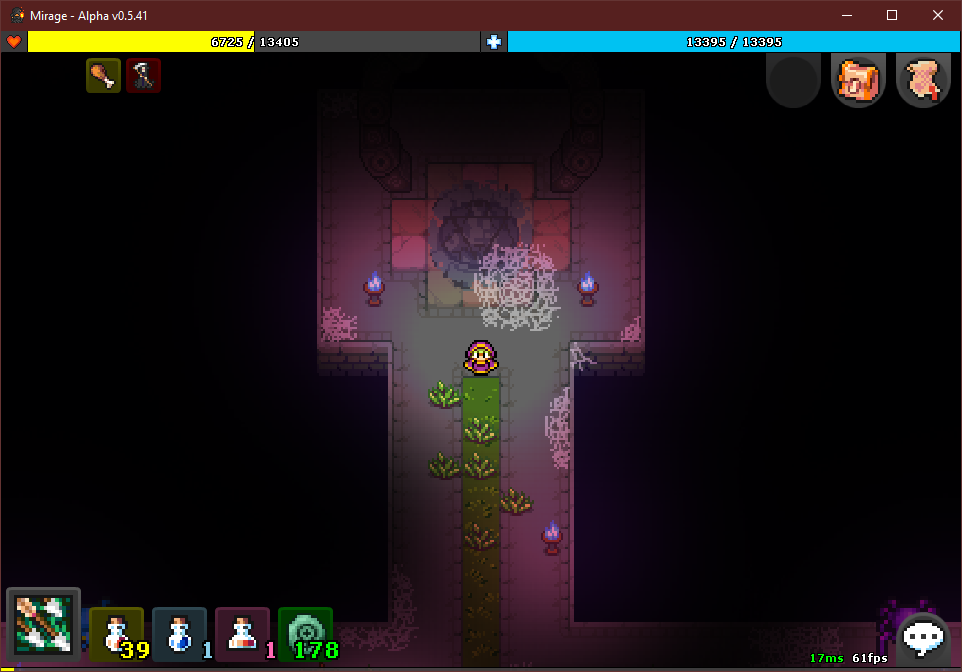 Hey everyone, let’s just dive right into it. Chaos gates have been reported appearing around the realm, it is rumoured that sometimes they are active Traps Explosion spell damage increased 10% Rune damage increased 10% Party experience bonus increased by 2% per member, up to 10% (from 5%) Maximum friends increased to 50 Bosses are now unaffected by zone respawn rate modifiers 50 and 100 scroll purchase options removed Monsters now correctly use euclidean distance to find the nearest pathable square You can now target yourself to clear your current target Messages with @name in them will appear yellow to[…] 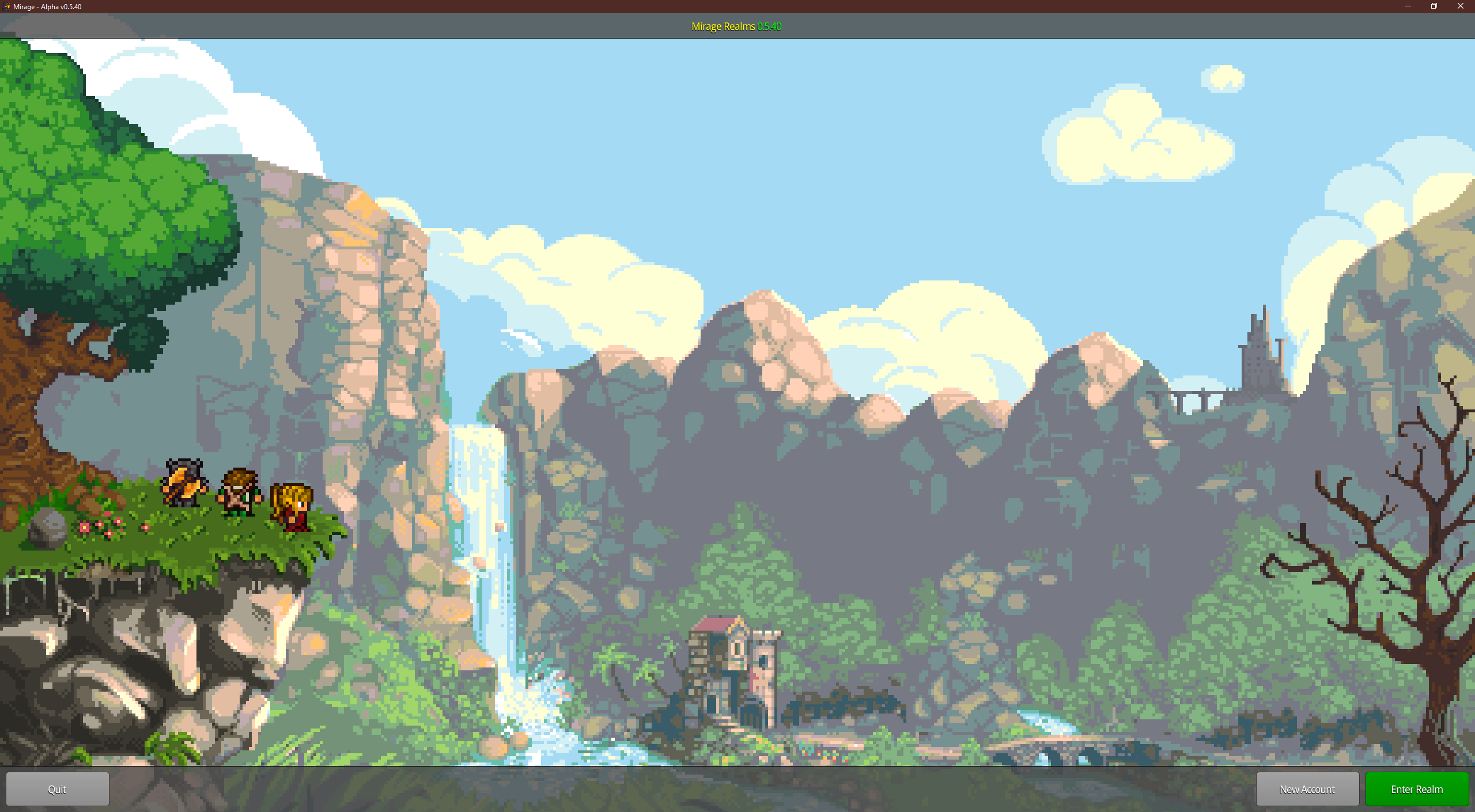 Hello everyone! This update is a sort of… emergency content update to expand the popular high level zones so there’s more room for people to hunt. While I have my content hat on I decided to take a swing at renovating town so that has gone live too. Oh! And we now have a title screen worthy of 2021 😀 New menu screen 😀 Brand new town New floor added to Heroes New floor added to Deeper Orcs New floor added to Shamblers Outlaws expanded Inferno given some slight TLC Reflect renamed to Thorns Lava lighting reworked to give a[…]

Hello! I accidentally spent my Sunday off looking into what exactly the database is doing and made some significant changes on the back-end in an effort to increase performance. The database is now getting exercised a lot less… I am unsure what kind of impact this will have but it is my hope this at least makes a positive dent. I could absolutely have broken a lot of things here without realising so hit the #bugs_glitches channel in discord if you spot anything fresh and suspicious. Significant back-end database changes, be on the lookout for spooky stuff Minimum currency drops[…]

Hi everyone, hotfixes mean this is server-side only so no need to update your clients 🙂 Found a huge performance issue in the Monster AI and pathfinding, this should now be 8 times faster which should result in significant server performance improvements under heavy load Blood splats and bodies now expire quicker, player bodies take longer to expire than monster bodies Currency drop amounts decreased by 25%, this affects both the minimum and maximum currency any monster can drop Drop rate increased significantly for extremely rare drops on high level monsters Fix for an issue that could result in players[…] 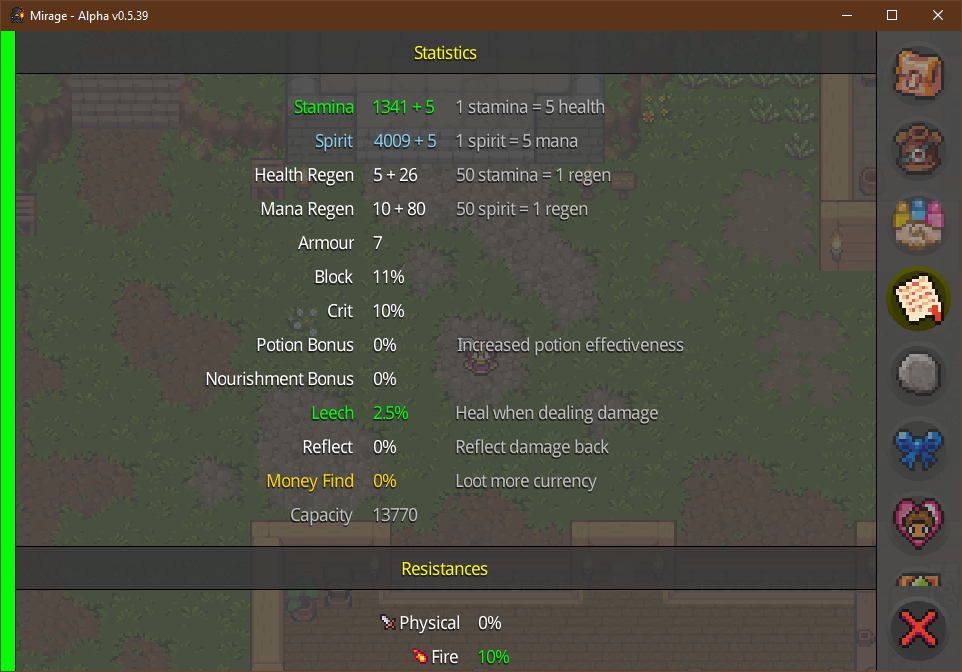 Good morning everyone, I attempted to do some remote profiling of the server today in the morning but by the time it got to midday there were a lot of people online and to progress I needed to restart it so I conceded to putting that off until tomorrow. Not to worry, I had an idea on Wednesday night to make loot more interesting, and I think with today’s changes you guys are going to be looting a lot more gear so the timing couldn’t be more perfect. So, about secondary stat rolls on items… Block, Crit and Accuracy have[…]